Ancient and Rare Trees in Foshan

Ancient or rare trees are the treasures of forest resources. They not only objectively record and reflect historical development and changes in the natural world, but also reflect the cultural heritage of ancient civilizations. They are also rare tourism resources and unique cultural resources, which have very important historical, cultural, scientific, economic and ecological values. Guangdong has a rich variety of ancient or rare trees resources, and there are many rare plants.

Chancheng is a city with a long history. So are the trees here. Recently, the government of Chancheng District has released the latest catalogue of ancient and rare trees. There are currently 318 ancient or rare trees in the district. The oldest one is the two murraya paniculata trees in the turtle pond of the Ancestral Temple. They are 513 years old. In Chinese it’s called Jiulixiang, meaning "Fragrance can be smelled nine lis away” (li = 1/3 of a mile).

Outside the turtle pond in the Ancestral Temple, we can see that although the two jiulixiang trees are over 500 years old, they are not tall. They still look green and vigorous, with luxuriant branches and leaves, and small white flowers are blooming, fragrant.

The two jiulixiang trees are 2.5 meters high, with a tree trunk of 40 cm and the other 50 cm, with a crown of 4 meters. The person in charge said that Jiulixiang is insect resistant and has strong adaptability, so it can survive hundreds of years of wind and rain. In recent decades they only suffered from borer disease from 2003 to 2006, but they were cured under the careful maintenance of the staff. Today, the two Murraya trees are still vigorous and can bloom once a month, especially in summer.

The locations of ancient or rare trees in Foshan are dispersed, mainly at the entrance of the village and the front and back of houses, and some are in tourist attractions, parks and other places. Whether you go to scenic spots such as Zhongshan Park, Ancestral Temple, or stroll through villages such as Yanqiao Village in Jiujiang, people who pay attention will find that there is an "identity card" on the trunk of some old trees, which indicates the age and name of the tree species. The protection of rare or ancient trees in Foshan started more than a decade ago. In 2005, Foshan City promulgated the measures for the protection and management of ancient and rare trees in the city, requiring all districts to register, set up archives, establish management information system and report to the city for filing.

Since then, various districts in Foshan City have conducted surveys and verification of ancient and rare trees. The tree height, diameter of the tree trunk, crown width and other indicators have been measured, and the tree state, growth vigor and environment information have been recorded. The age of trees has been investigated, and a file database including number, written records and pictures has been made for registration and recording.

The person in charge of the city's Landscaping Department said that ancient or rare trees are a complex of multiple values. Ancient trees not only have the ecological value of common trees, but also are important materials to study the changes of local natural history. In addition, ancient or rare trees are non renewable, and once withered, they can not be replaced by other plants.

The formation of ancient trees takes a long time (at least 100 years). Tree planters usually cannot wait until the tree they planted becomes an old tree during their lifetime, and the growth of rare trees also depends on a certain chance. Therefore, both ancient trees and famous trees can not be produced in large quantities in a short period of time. It has a specific timing.

The state of ancient trees is also dynamic. On one hand, with the increase of tree age, some ancient trees are likely to die and disappear due to weak tree vigor and human factors; on the other hand, some old trees will become new ancient trees over time.

The canopy of ancient trees is usually large, which has obvious ecological value in producing oxygen, regulating temperature and air humidity, blocking dust, and reducing noise. Some ancient trees also have the function of absorbing certain harmful substances. In addition, as mentioned above, ancient trees can be used in the study of local natural history, so as to understand the changes in the region's climate, forest vegetation and flora, and provide a reference for agricultural production zoning.

Some ancient or rare trees of cultural value or historical value can form a natural landscape that is difficult to create artificially. For example, jiulixiang, located in the Ancestral Temple, a famous scenic spot in Foshan, has attracted many tourists with its special ornamental value.

Some ancient trees are endowed with humanistic feelings, such as the old Ficus microcarpa trees in the old village of Yanqiao in Jiujiang, which have special cultural and historical value. Whenever there was a big event, Yanqiao villagers would lead the from the trees to the ground to plant more trees. The villagers recorded every historic moment by planting trees.

If you are interested in trees or any other plants, Foshan Institute of Forestry in Naihai District is good place to visit. It’s open all year around and no ticket needed.

The base covers an area of 860 mu, with 260 mu of camellia germplasm resource bank (national level), collecting 1525 kinds of camellia germplasm resources at home and abroad; 200 mu of rare and endangered plant area collecting 203 species of plants; 100 mu of seedling breeding area. It also has 400 m2 of laboratory, 1000 m2 of greenhouse plant exhibition area, 140 m2 of ecological science museum, 110 m2 of scientific and technological achievements museum and 75 m2 of butterfly specimen museum. There is a science popularization activity room with a capacity of 120 people, intelligent forestry Internet of things, real-time flower and bird watching video system and science popularization playing LED large screen.

Learn all about Foshan Forestry

The science popularization activities held by Foshan Institute of Forestry include special lectures, camellia theme exhibition, recognition and cultivation of camellia, identification and practice of poisonous and harmful plants, camellia culture, and a number of science education and popular science activities on the National Science Day. The number of participants reached 200000. It also has a national vocational skills training class. 229 flower gardeners, junior and intermediate workers in greenery industry were trained for Foshan. 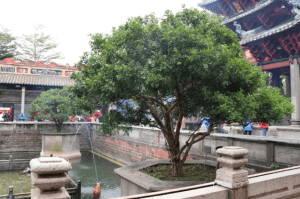